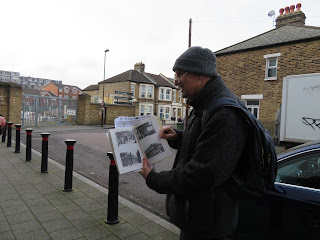 Since October Dr. Peter Coles - at times in conjunction with the Museum of Walking- has been  showing us London's mulberry trees. As we were standing looking at the pictures of the former site of the Lewisham silk mills, a by- passer remarked that her mother knew the mills in the 1930's - and they had coincidentally just planted a mulberry with Lewis from the  Orchard Project, just a 100m from where we were standing.


The history of silk goes back some 5,000 years. Discovered in China the closely guarded secret of its manufacture found its way to this country via the Silk Road and the trade routes of the world.

From the Inns of Court to Keats House Museum, to Victoria, St. James' and Green Park we have seen-on Peter's walks- white and black mulberry trees hailing from the time of King James when he tried to kick start a silk industry; or the remnants of a former silk industry brought over by the Huguenots; or the specimen trees, which were a must have for every stately homes such as Red House, Chiswick House, Forty Hall; or our very own orchard mulberries in Kingston. Peter's book on the subject will be published in the summer.

The Roman's introduced mulberries in the 1st century - on account of their health properties- progeny of these trees sometimes remain in hospital monasteries. This is why old trees survive at Syon house as it was a former monastery.

Our own Tolworth nature writer - Richard Jefferies - kept silk worms at his birthplace in Coate, Swindon and fed them on the leaves of the black mulberry in the family garden. The silk produced from these leaves is inferior to those of the white mulberry, but it is not impossible to raise them on black mulberry.

Last November, one of the volunteers at the Richard Jefferies museum, asked of the panel on Gardener's Question Time, as to how the gnarled mulberry in the museum garden could be propagated and was given some advice on truncheon cuttings and layering.

Mulberry trees reproduce by layering- just falling over - so they can look a lot younger than they actually are. If you want to know where your nearest trees are or  you want to add a new one to the database that Peter has compiled then this link is an invaluable resource https://www.moruslondinium.org/ 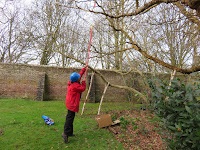 Here Sivi is pruning one limb from the mulberry at Dorich House during Lewis'  annual supervision courtesy of the Orchard Project. Peter says this tree predates the 1930's property by some time. Last year we planted some mulberry truncheons in an effort to propagate the tree but we were foiled by the long hot summer. This year we have taken the precaution of increasing the types of propagation across more of us.
black mulberry Dorich house Forty Hall Huguenots Keats House Museum Orchard Project Red House Richard Jefferies silk white mulberry