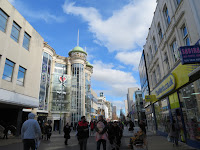 Thirteen years ago - at the behest of LB Redbridge - I walked around with a sign on my back asking people to tell me about their house sparrows. Ilford had an impressive population of house sparrows that appeared to be thriving in the town centre. The aim was to identify features that the birds depended on, so that they could be retained in the regeneration. This year I decided to revisit some of these sites.

The decline in house sparrow numbers has already been well documented in Britain where sparrow numbers are believed to have fallen by 70-90 per cent in the past 15 years. House sparrows are  declining all over the country, but primarily the decreases have been in the south-east of England, with the worst hit area London itself. Indeed, 7 out of 10 of London’s sparrows have been lost since 1995, and we know that the decline started long before then. Although it is still a relatively common bird in the UK we have lost almost 12 million house sparrows countrywide since the early 1970’s.

In 2002 survey was undertaken in the London region entitled ‘Where have all our sparrows gone?’ It was completed by nearly 12,000 households (London Biodiversity Partnership). House sparrows were noted at 73% of participants’ homes. This varied from 94% in Havering, and 93% in Barking and Dagenham, to 30% in Camden, and 17% in Westminster. The highest mean number of sparrows per home was 12 in Barking and Dagenham; the lowest was 1 or 2 in Kensington and Chelsea, and Westminster.

In 2006 in addition to nineteen pairs of house sparrows, there were 25 species of bird found breeding around the town centre.Although early in the year it would give an early warning on what to expect.


First stop the wonderful Exchange building, opposite the railway station, with its human scale, healthy street food and its natural light. The signs en-route to the toilets are reminders of the mammoth skeleton that was found in Ilford. The outdoor planters were gone, so nothing left for birds. Banks had become coffee shops, road names had changed, the toilets near the police station had been refurbished, vegetation gone, greenery gone.

No sparrows outside the Kenneth More theatre, although new trees had been planted in recent years. The amount of vegetation - bursting out of the railings at the library - had shrunk. Pied wagtails ran around the pavement, which is great to see in a bustling district centre. Pigeons and gulls certainly attract the attention of nearby peregrine falcons.

Over a decade ago, Cineworld featured in the local newspapers as 'giant rats' were reported climbing the curtains. Instead of blaming the trail of popcorn the shrubbery outside the library - a sparrow favourite - was seen as the culprit. It was good to see that it remained, including the wonderful Garrya elyptica, although  tightly clipped and  birdless. Giant rats were seen but they were along Connaught Road whilst walking like a lawnmower along the streets radiating from the High Road and Winston Road. 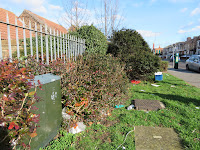 At last, crossing the tunnel under Winston Road - chirping was heard from a very small ivy covered buddleja. The Mildmay birds: green areas have been reduced/grass covered; the communal dust bath had been planted with trees and cotoneasters; only 2/3 pairs here so the search continued; and to Albert Road where a further 3/4 pairs were located. Thanks to the Mildmay Centre for conserving its threads of sparrow life.

The number of gardens that continue to be paved has not abated. Councils worried about air pollution are considering charging more for petrol cars in the CPZ's and allowing electric cars to go free. This could hasten the removal of any remaining privet and thorn hedges. Lleylandi and buddleja may be scorned but they are better than nothing and are certainly working to retain habitat for this bird. It seems, you can take the sparrows out of the town centre but for the moment, you can't take them out of Mildmay.