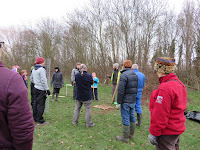 Months of preparation for a new community orchard culminated yesterday with  participants - expertly schooled by the Orchard Project - planting trees and fruit bushes. After digging suitable holes, tree roots were dipped into  a mycorrhizal application of beneficial fungi designed to colonise the  roots and create an early mycelial network within the soil,  increasing nutrient and water uptake. The trees were surrounded in protective cages and three fruit bushes - a gooseberry, red currant, white currant or a black currant - were planted around the base.


Amongst the trees planted were: a cider apple Tremlex bitter - and apples Newton Wonder, Cor Blimey, cherry Merton Glory and Lapins, a  fig, and a medlar var: Nottingham; a self fertile tree, the fruit of which, should be harvested during October. Pomegranate is becoming more popular in our changing climate and ours was covered with a sheet to protect from the frost during the next few months. It isn't entirely frost hardy, but once established will regrow from its strong root system.

A black mulberry, var. Chelsea was named after the trees at Swan Walk, originally planted by James 1st. During WW2 the last tree was removed from what is now the Chelsea Physic Garden, in order to construct an air raid shelter. Cuttings were taken, hence the provenance of the current tree. Some dried  white mulberries - from Turkey- were shared, apparently they are more widely available from Turkish shops.

There had been a mid-week mulberry walk 12.12.18, jointly held with Dr. Peter Coles of Morus londinium and the Museum of Walking to visit the St. James' mulberries including: St. James' Church, St, James' Square and St James' Park where there are six mulberries (both white and black). The oldest mulberry was the one in the 18th century St. J's Square which has layered across the ground. Peter had been to Dorich house in Kingston the previous week to see the mulberry which he thinks may be a similar age. We will be attempting to prune a small amount- as we did last year- during January or February 2019 under the guidance of the Orchard Project.