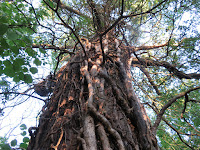 In 'Places and Buildings by H.V. Molesworth Roberts 1970, it is asserted that Dancer Dick wood, at the junction of Cromwell road and  Salisbury road, is a relic of the Great Park of Nonsuch. This woodland copse owned by Epsom and Ewell council is partially responsible for the strong woodland bird community in the district, which includes nesting nuthatches, tree creepers and woodpeckers; there must be some association with these birds  and those in a nearby  wood designated a Site of Nature Conservation Importance at Riverhill north-west of the Hogsmill.

The wood may have been a pasture - according to the 1871 OS map - although some of the old oak trees may  pre-date this; could wood pasture be more likely.  I  was first told of the wood's existence from Lucy Furlong, recounting family walks. After a couple of visits , I was able to ascertain that pipistrelle bats are using the trees for roosting, emerging rarly, at 30 minutes before sunset. The council are keen to bring this much neglected wood back into conservation management during next years work programme.

This hopefully will reverse the  high levels of rubbish dumping in the wood  and curtail the spread of bamboo, along with other invasive species, although it will not bring back the pond, which appears to have been filled in during 2017. 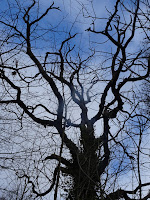 According to information provided by Jeremy Hart and David Brooks at the Bourne Hall Museum, Dancer Dick may have been Henry V111's jester at Nonsuch Palace and  pleased his master so much with his antics, that he was given the wood as a reward. It is also said that DD was a highwayman who made his victims dance before he robbed them. Another version attributes the name to Richard Cromwell 'Tumble down Dick' (hence Cromwell road).
The historians tell us that where Dancer appears as a generic elsewhere, it derives from a surname, such as Dancer's Hill at South Mimms (where there is currently a prestigious mansion up for raffle). There is a similar place - name at Dancing Dick's Lane and Farm at Witham in Essex. According to Paul Cavill, this combines the Middle English Dancing with the Old English dictionary 'ditch' which means a field with boundary ditches used for dancing, for which there could be no better use.