June 05, 2018
It was a splendid day, and eventually, I found the ancient oak tree with its processing jet ants. However, I felt exhausted after three hours of engine noise from the direction of  Great Hollands field -the one closest to Jubilee Way car park- made worse by the fact that I was in Great Meadow field - its polar opposite. Eventually the noise found me, as young motorcyclists - looking more like they should be on a beach- began tearing up and down the newly mown pathways, outstripping the noise of the drones being flown.

After three hours of noise and 25 degrees of sun, it was becoming difficult to ignore the fracas and so I rang 101. The police response said, "if your calling about anti-social behaviour please hold the line, otherwise go to our website.' So I hung up and decided to engage myself with the four endearing young men who warned me to mind my own business or I could be facing a Crocodile Dundee situation.


Leaving the nature reserve coincided with the timely arrival of the Surrey Police  at the county boundary. But the anti-social behaviour that I was attempting to report hadn't put me at Risk, Threat or Harm, which was a requirement to trigger investigation.

Nature is everything, it gives us all we need (food, water, air, soil) it is the basis of our economy (food, commodities, minerals etc.) keeps us sane (beauty and healing space) we cannot report its abuse, unless we have been under threat, harm or risk. 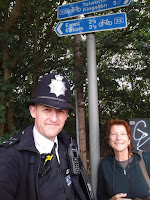 However, with a recent escalation in criminal activity  the Metropolitan police have been told by the community that  Tolworth Court Farm is something the would like to see prioritised and they have been working with their counterparts in the Epsom and Ewell teams so hopefully we can get greater coordination.


Drones, I have since discovered through the helpful Police Constable Ben Styles from  the Tolworth Safer Neighbourhoods Scheme, technically speaking, should have a camera. It is a little difficult to unpick the current situation with the flying club, but it may be that they do have permission.

For more information about drone and data protection, visit the ICO’s website at
https://ico.org.uk/for-the-public/drones/