April 08, 2018
Participants largely from Malden Manor and the Sunray Estate community  groups, joined me for a  three hour walk along the Hogsmill  organised by the Sustrans. Sharing information about our open spaces can assist in their protection.

We began by looking at old maps revealing how the river had been straightened in three sections; and how former land-use was reflected in the names of local streets and buildings such as at Furzeland house, which would have been built on the site of common land  growing gorse.

We discussed two corridors additional to the river that are considered important for animal movement: the railway used by reptiles for basking on substrates;  the pylons, where the vegetation beneath requires annual management for access and maintenance. The latter attracts species totally, dependent on  the type of management employed (ranging from traditional coppicing at Castle Hill Local Nature Reserve (LNR) to bulldozing at unprotected sites in the south of the borough). Slow -moving plants and insects are particularly dependent on these corridors for movement, including the mistletoe - prevalent in the district - and often a priority species in Biodiversity Action Plans.

We looked at the many factors now facing our LNR's, such as nitrification from dog mess. To wry amusement I read a passage  in a council bird survey report I had written in 1997,  highlighting the problems of dog mess including, increased numbers of dogs especially brought here by professional dog walkers, as well as larger and more boisterous breeds. The photograph shows how the grassland responds to constant enrichment by growing nettles and hemlock, with a loss of the more sensitive plants.

During our deliberations we saw the blue flash of a kingfisher heading up - stream. We recorded  three chiff - chaff territories; this is down on surveys, which have previously recorded at least five singing male birds (surveys used to be commissioned every two-five years up until 1997). There was no evidence of a cacophony of bird song until we reached Six-acre meadow, demonstrating the importance of larger green spaces for birds; as opposed to the increasing urbanisation of the reserve entrance  with street furniture and lighting, where only the occasional wren could be heard singing. We examined a  green woodpecker poo, resembling  the burnt white ash of a disguarded cigarette.

This is one of the specialist grasses on Hogsmill O.S. - Luzula campestris or Good Friday grass - whose pollen grains were ready to disperse on the next breeze. The importance of this meadow was recognised by a prescient council officer, Andy Watson, in the 1990's. He arranged for the sowing of a parasitic plant - emulating cattle grazing- called yellow rattle to arrest the growth of the vigorous grasses, which could smother the knapweed, sorrel, birds-foot trefoil and speedwells, so important  for attracting butterflies. 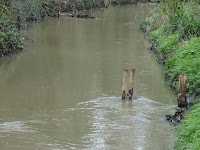 We discussed in-stream improvements that are currently taking place in the river; a project undertaken by the Environment Agency team acting as volunteers. Deflectors are being installed to create flow diversity in the channel. It seems unfortunate that little is done about the large amount of sewage spilling from the Epsom and Ewell storm tanks; we  noted the large amount of rag from recent heavy flows from the tanks as well as an amount of misconnected pipes from new extensions.

We looked out for roe deer, animals  suffering directly from  disturbance from dogs, and found their
slotted prints in the mud.  One was seen fleeing towards the road, during the wet recce for this walk earlier in the week. The worry is that these animals can be driven towards the road,  which has seen an increase of  vehicular traffic in recent years. Here is an excellent picture taken by one of the local residents.

After the walk it was interesting to be shown Risborough Green, where slow worms have been recorded in local gardens. The rough grassy banks are obviously good for these animals and I will record them in a database I  compile of species found in the borough.
chiff chaff Hogsmill O.S. Kingsfisher Malden Manor Community Group roe deer Sunray Estate Sustrans