Reptiles in the borough 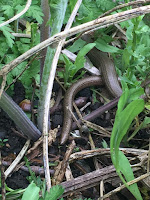 Highlight of the week: looking for sandmartins at Kingsmeadow and finding slow worms along the Hogsmill. Now the weather is warming it is a good time to spot slow worms. one was seen slithering across the path near Dickerage Lane recreation ground close to where a dead one was found a couple of years ago. Dead ones have been seen in the south of the borough.
Last weekend I visited Risborough Green - near the Beverley brook - where these animals have been recently recorded. The last comprehensive reptile  survey of the borough was carried out by LEHART as they were then  known (now the London ARG) by Will Atkins It is thought that Risborough Green has was known as Kingshill Conservation Area in these surveys.

The rough grass on sunny banks, should be retained for them as there are few places - other than allotments - where we have recent records except Tolworth where there are records of slow worms and common lizards. The latter species was recorded during surveys prior to the development of Tolworth Girls School. Other animals  such as hedgehogs will also benefit from informal management.

Of course there are records of grass snake mainly associated with Hogsmill river crossings near the sewage works, which used to be a strong hold for this species in the borough. They are also found in the wetter areas in  the south of the borough.
Beverley Brook common lizard grass snake Risborough Green slow worm