January 06, 2018
The annual wassail was held at Pensford Fields in North Sheen this afternoon. Pensford is a haven for wild flowers, birds and insects rescued from developers in the 1990's. It is a site of importance for nature conservation  and a designated area of tranquility. It also inspires art, children’s play and education.


During proceedings the wassail master read his short poem against the cracking fire and a ukele band played sing- along - songs and we did circle dancing.

We clapped as Bella was crowned the new wassail queen and a noisy procession began.

Fancy dress is encouraged and also any sort of instrument or implement which makes a good noise will help us scare the evil spirits away from the fruit trees in the orchard. This is a key part of the old english Wassail custom which dates back to pre-Norman times.


Cider was presented to a dressed apple tree in the  orchard.

Toast was left in the tree to appease the spirits and give thanks for the fruit.

There were plenty of cooked apples in the food and drink - including
mulled cider - but the only fruit seen on trees in the local area were OLIVES growing on trees planted along High Park Road en route to Kew Gardens station.

I am told that 70 people turned out to a Streatham Wassail. They look so beautiful dancing around the tree. The wassail cup was produced from an old trees that were removed a couple of years back. The cider was produced form Apple Day donations 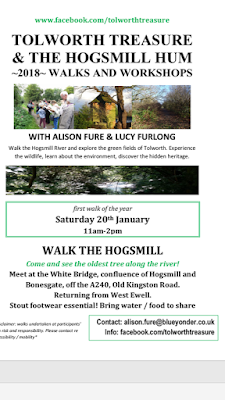 For those interested in  Kingston's orchards- the leaflet mapping local the heritage apple walks - should be available in most libraries, the heritage museum as well as  the local history room. Lucy and I will be leading walks around Tolworth and the Hogsmill river from January 20th.

Of course there will be some news about the Tolworth apple store - see centre of the poster - get in touch if any of these appeal.