Tolworth Treasure and the Hogsmill Hum

A wet start: - our band of twelve walkers- gathering at the confluence of the Bonesgate with the Hogsmill - discussed the amount of sediment flowing down the minor river from Chessington and the effect on its fauna. From a fish perspective this can transport beneficial food resources as the routine presence of the kingfisher testifies, perching just above the deep pool carved at the join. 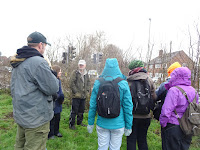 However, in times of spate the system can be  overloaded with suffocating sediment. Lucy read  'A Ramble by the River Side' by John Clare, a highly accessible poem with resonances of the Hogsmill, due to the coincidence in species such as teal; followed by a passage from Richard Jefferies on finding bluebells in the district with a reluctance to divulge the location; based on his wish that we find beauty for ourselves.

We discussed how sensitive species can be lost during urban densification and how increasing amounts of  sewage pollution undermines the health of the stream. Volunteers monitor the effluent from the river outfalls to quantify the amount and type of pollution.

The River Monitoring Initiative or RMI as its known, was explained; there is a training course  at Kingston University 21st  April from 11am until 4pm. If anyone wants to come along, the training is free, but people have to sign up beforehand – there may have a cap of 25 on the day, so I would recommend getting in touch soon.

We walked through Riverhill Copse and discussed the inventiveness of the council in creating spaces designed to increase the peaceful enjoyment of nature at this sequestered school playing field; as well as a figure of eight amble through trees, which now adorn a former allotment site. Here we discussed the value of the yellow meadow ant mounds for birds and small mammals. We admired traditional country crafts such as hedgelaying along Rushet Road, and willow spilling along the river bank towards Chambermead - creating good habitat for wrens and basking reptiles- just after hearing a song thrush singing the 'end of rain'.

We stopped at Pam's favourite elm tree where she watches white-letter hairstreak butterflies flitting around the top of the tree. The tree is opposite the Ewell storm tanks, which function as temporary storage for untreated sewage as it travels through the network of pipes towards the Hogsmill Sewage Treatment Works (STW). During heavy rainfall, rainwater as well as sewage fills up the system: to prevent it backing up into homes. Usually the storm tanks contain the sewage until the rain has passed and the sewage can drain back into the network to be treated at the Hogsmill STW. However, occasionally, during higher rainfall, the storm tanks fill up completely and will discharge any excess sewage to the Hogsmill river itself.

This system was designed when the population of London was much lower and the area of paved urban surfaces (which cause rain to run off rather than infiltrating into the ground) was much less. It is a consented discharge – which means it is legal – as it was originally designed to happen only very occasionally, but with population growth, urbanisation and climate change, it now happens more frequently. Volunteers have monitored around 12 or 14 flow events per year in recent year including a big event which happened a week after our walk see the video here http://www.southeastriverstrust.org 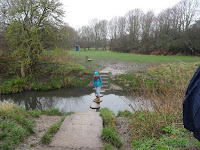 'Proper' stepping stones
At the Ewell Court Stream Lucy revealed the Pre-Raphaelite painters who lived and worked locally.We viewed the chalk in the strata at the Stepping Stones' and were reminded that this is a rare or 'priority' habitat with only 200 chalk streams in Europe.


Pam showed us the egg of a brown hairstreak on blackthorn with the aid of her hand lens. When we came to the Green Lane stream we had a prolonged view of a kingfisher from the bridge arcing away to avoid us while actually surrendering his full colours; we walked through a grand tree line avenue to celebrate the oldest tree in the borough.


Ending at the six ponds at Bourne Hall- some are spring ponds - whereas others are on a different system, such as the horse pond and the channel along the front entrance to the park.
Lucy and I will lead our next walk 25.2.18: come and be the Tolworth Edgelands come and be an Edge Navigator.

Meeting in front of the Hogsmill Toby Carvery along Old Malden Lane/Worcester Park Road https://www.google.co.uk Come and discover some of Tolworth’s ‘edgelands’ – find out what edgelands are and why they are important.


Postscript
A second incident took place on Saturday 27th January 2018, in which sewage sludge from the Hogsmill Sewage Treatment Works was released into the Hogsmill river. Sewage sludge is one of the final products from the sewage treatment process and so it does not contain any rag.

Thames Water has been working through the night to minimise the impact and has provided the following statement.“We’ve stopped a spillage at our Hogsmill treatment works, and are working closely with the Environment Agency to clean up the area. We are very sorry that not all of the spillage has been contained on the site, and a full investigation is now underway.” – Anthony Crawford, Head of Wastewater Control, 28th January 2018'.

During our walk we said that although this is a  sad business; but not to despair, as nature has a wonderful way of fighting back. The bullheads and stone loach that reside in the Hogsmill are surely testament to that. Last night Chris Packham commenting on the state of the palm oil business said  that it is important to let people know about these things - they will be hurt - but without this knowledge they can do nothing to fight back.