July 03, 2017
Two teams of ten participants spent the night of 23.6.17,  harp trapping bats, as part of the National Nathusius' Pipistrelle project. We surveyed five sites last year and intend to  cover a similar number of local water bodies this year; starting at two lakes at different locations across the Hogsmill Sewage Works.


The eastern lagoon forms part of the nature reserve, which is open to the public (on obtaining the code from Kristine Boudreau, Hogmill Reserve Manager:
kristine.boudreau@thameswater.co.uk

Recently a second bird hide has been installed and lower water levels and habitat improvements have provided plenty to watch and listen, including a cettis warbler. The reserve is rarely seen at night so although  small numbers of swifts and house martins breed locally along Chiltern Drive, we were surprised to see ~100 swifts feeding well after sunset. 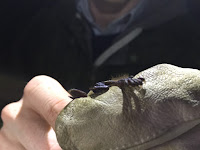 Both traps caught Daubenton's bats - see the characteristic hairy feet in the photo- but Nathusius' pipistrelle was caught only at the western lagoon. Both were new species for the site. In addition we recorded Leisler's and noctule bats as well as common and soprano pipistrelles.
cettis warbler Daubenton's bat Harp trapping Hogsmill Sewage Works house martin Leisler's and Noctule bats. Nathusius' pipistrelle swifts