Eels in the Hogsmill river 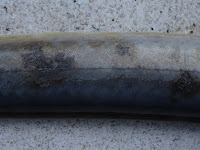 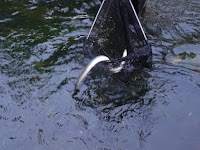 River levels are lowering, which in summer can mean that so are  levels of dissolved oxygen. A few dead fish were found last week (5.7.17) although it takes a lot to kill an eel; so the Environment Agency were informed when this one was located near Knights Park, near to the university campus. There were a abrasions on the skin but otherwise it seemed in good shape. 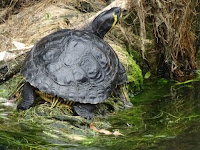 A virus known as HVA- a type of eel herpes- can lead to lethargy and necrosis of the gills and other organs. It may be spread by the addition of pet 'goldfish' into the Hogsmill, which have been reported upstream and downstream of this location (use the search box).

Last November, while  electrofishing in the Hogsmill, the EA took cell samples from an eel displaying symptoms, or spots, which turned out to test positive for HVA. Also added to the Hogsmill are a number of terrapins and this chap was seen basking on a log - along with some Chinese mitten crabs - below the weir at Watersplash Close/Grange Road. The addition of these non-native invasive species is not without consequences for wildlife. 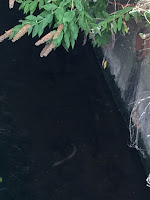 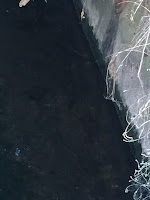 A second eel, seen last night from the bridge over the Hogsmill at Villiers Road, appeared to be struggling to keep upright. The Environment Agency suggested that 'due to the low river levels eels are forced to leave shadowy subterfuges in the shallows, where they fall prey to herons'. The one in the poor quality picture is perhaps slightly too large for a heron and managed to escape although not without injury; it did seem to have a kink in its body indicating some internal damage.


The promised rain may not be an end to the low levels of dissolved oxygen as it may get worse before it gets better depending on the amount of rain. A small amount may be sufficient to knock back the algae so that it begins decomposing and robbing yet more oxygen from the water.  We need a substantial amount of rain to improve current conditions.