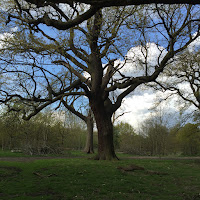 Eighty years ago - the birds  nesting within this tree and gathering food from its canopy - would have been quite different to those of today. These days, ring-necked parakeets seem to adorn every bough  and when C. L. Collenette wrote  'A History of Richmond Park' in 1937,  none had even been recorded.

A very different bird community was recorded in the 1920's and 30's, with not only breeding records of tree sparrow, yellowhammer and grey partridge but  even red-backed shrike. Passage records exist for the latter in 2008 and 2010  (I only saw the more recent). 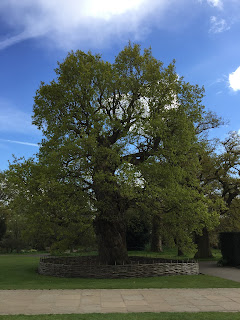 Collenette writes that the tree pipit was a common summer resident, now described as an uncommon passage visitor. 'On a walk around the park 26th April, 1935, I noted some fifteen different males singing their territories. This bird after the hedge sparrow, is the most favoured host of the cuckoo in the park'.

During today's visit to the park, I was disappointed not to see any swifts, swallows or martins. The 'first'  date in my records for swifts above Pen Ponds is tomorrow 28.4.16.

In the bird report of 1936, house martins attempted to nest on the wall of the lodge at Robin Hood Gate, but were turn out by house sparrows. 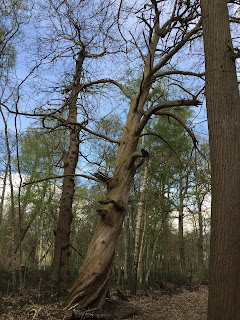 Collenette noted hare  as 'fairly common' and at Teck Plantation 1934, two were admired boxing together. Pine martin and polecat were not unknown and the demise of the red squirrel is also documented.

Of the bats recorded, barbastelle was thought to be resident. One bat described as large as a snipe and thought to be a noctule, may have been a greater horseshoe bat. This species was last recorded in the London area in the year that I was born (1957); so it is one of those easy to remember dates, like the Battle of Hastings.
barbastelle Collenette grey partridge hare red squirrel red-backed shrike Richmond Park ring necked parakeets tree pipit yellow hammer