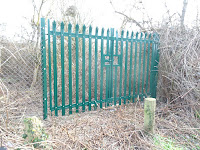 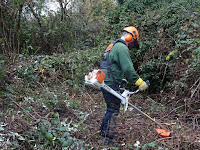 Remember us clearing the ground and getting the green gates installed at Tolworth Court moated manor site? Well yesterday, we had our first public open day, to show off the reserve's natural and heritage assets.

Around 100 people rolled up to listen to talks about wildlife and land management from me; archaeology from Julie Wileman; participate in a scything workshop  from Elliot Newton followed by some words of historical wisdom from the pages of Bob Phillip's new book entitled 'The Story of Tolworth' now available from many local outlets, including the nearby Court Farm Nursery.

One of the features of the moated manor is the yellow meadow ant mounds - an artifact of traditional grazing management - as well as the subsequent Higher Level Stewardship annual hay cut regime, currently in operation along the Hogsmill Valley corridor and Tolworth Court Farm Fields.

I am told that the ant-hills appear to have a high ratio of height to radius. This happens when the ant-hills have been shaded for a time (e.g. by tall grasses or scrub) and subsequently (grazing) management is reintroduced and scrub is removed.

Scything is also a traditional method of emulating grazing,  thereby increasing the floristic diversity of the grassland. We had brokered a 'barter' with Stave Hill's centre manager: to undertake training and borrow scythes for our workshop; in exchange for performing a bird survey at the Ecology Park, Globe Pond and the boundary that forms part of Russia Dock Woodland, LB of Southwark. 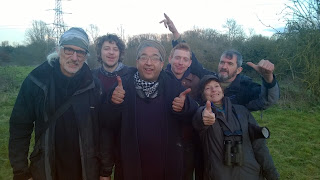