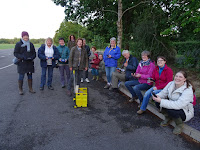 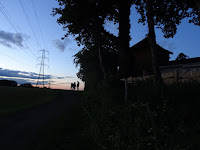 Twenty students and members of the public became Citizen Scientists at the University Sports Ground, Tolworth last night, in order to study the bats at the site. By splitting into two teams and locating ourselves at opposite ends of the site, we were able to discern  more about the local bat population than would a traditional linear bat walk.

For example, Team 1 situated near the site entrance, had the first bat a common pipistrelle recorded at sunset + 35 minutes. But Team 2 had to wait much longer for bat activity and had to return to the southern hedge boundary in order to find any activity. Unfortunately, heavy rain earlier had an affect on the temperature and insect activity, thereby reducing the about of prey available for bat foraging. Bat passes, including those of a soprano pipistrelle were limited to the boundary hedgerow and oak trees. However we were treated to the activity and calling of a pair of tawny owls.

One of the participants had some interesting tales about the families (one named Offa) who farmed this site and the adjacent Moated Manor LNR, where there were two impressive pantiled barns with timbers rescued from ships which participated in the Napoleonic Wars (before they were burnt down). The old apple-store (silhouetted in  the photo) is presumably a remnant from these days and any information about this structure would be welcome (see previous posts).