May 13, 2015
The quarterly meeting of the Kingston Biodiversity Network was held at the new Quaker Meeting House, Fairfield East in their wonderful new building.

Here we heard from Kingston's  Greenspaces Manager regarding the updated Greenspaces Strategy 2015-2018, which will include some of the documents we have been compiling over the last two years. This  includes the Habitat Action Plans for Open Water, Woodland and Grassland. It also has a statement on lighting and there was some debate on the topic of unwanted light spillage from members of the audience. 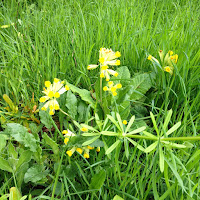 Lastly Tom Hooker, the Chair of Surbiton Wildlife Group (see previous post) spoke to us about the group's aspirations to fund-raise for improvements for their local open space. 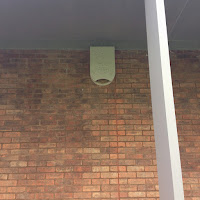 The Friend's hall is very easy to hire and is conveniently situated close  to transport links. It has many green, sustainable features, which include: rainwater harvesting, low energy lights, permeable hard standing, good insulation, an energy management system, ground source heat pump as well as a central cooling system. The patio doors open into a garden full of lush vegetation. The new meadow is thriving, with plants such as ox-eye daisy, red campion, cowslips and a double hedgerow is about to burst into life. There are carefully crafted, bird nesting boxes on the roof and a bat box located at the top of the colonnade (pictured).