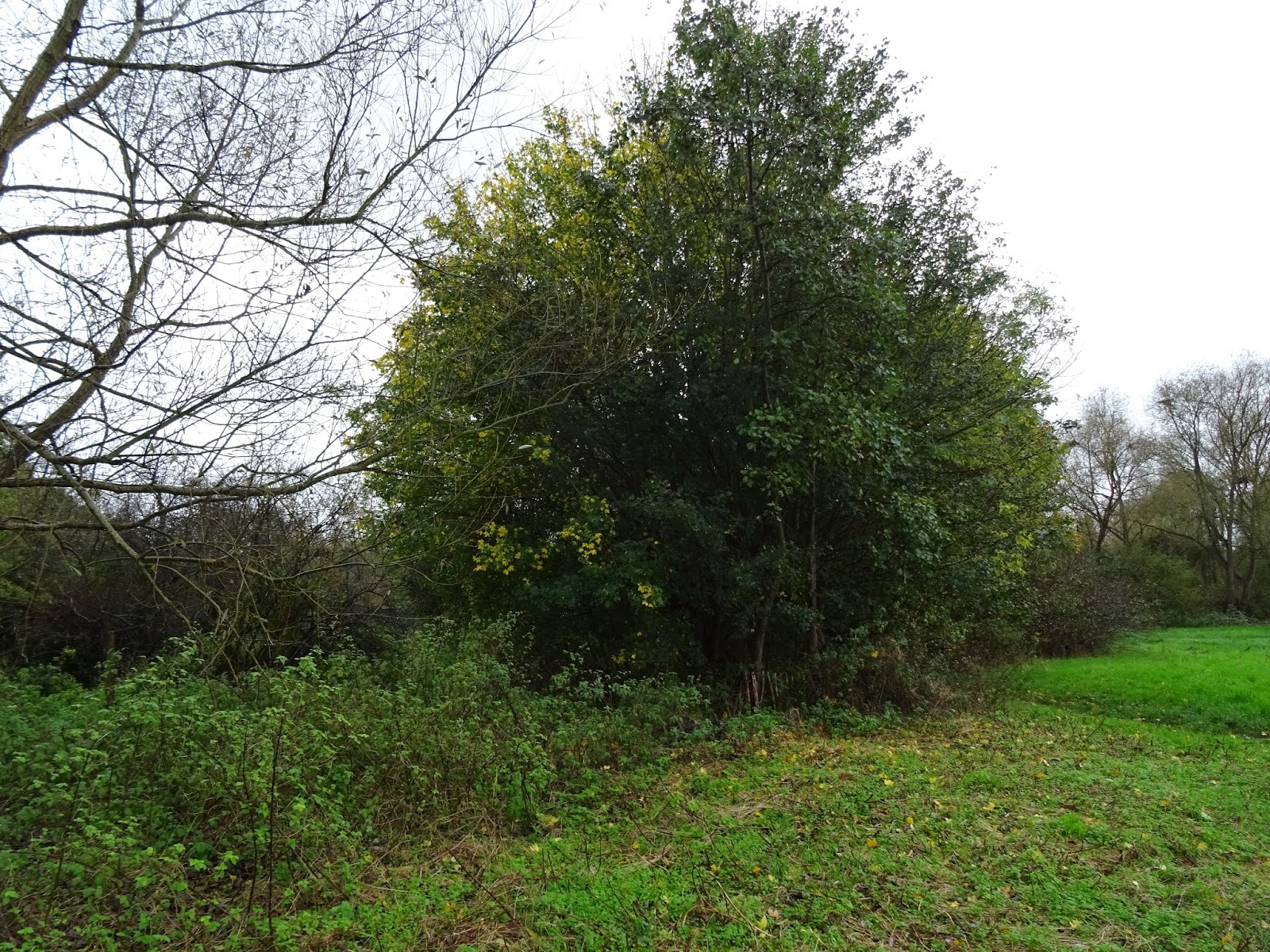 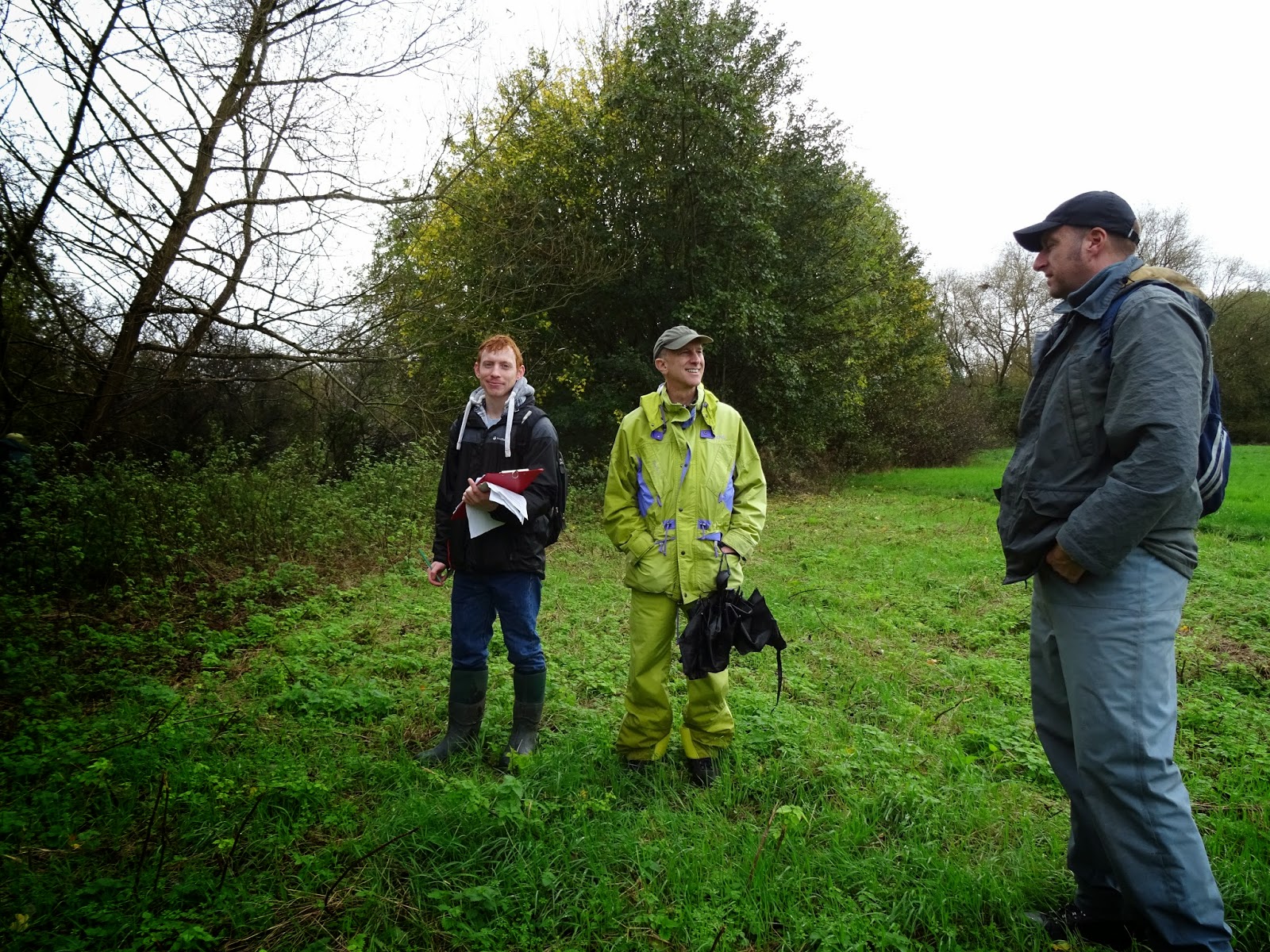 During a wet Sunday morning seven of us met at Tolworth Court Farm to survey the hedgerows. We used a standard methodology, as well as recording sheets provided to us during a training session at the Lower Moles office (Horton Country Park) earlier this Autumn. This required a qualitative analysis of the hedgerow from 'soup to nuts' i.e.: measurements of height, length, depth, canopy cover, species, evidence of nutrient enrichment, management, presence or absence of features including banks, fencing or 'nodes'.

We found that the hedgerows were: species rich (ash, oak, willow, birch, alder, hawthorn, blackthorn, hazel, dogwood and field maple) absent in invasive species; surprisingly absent in sycamore; recently managed, evidenced by the brush cutting of brambles; recently planted or 'gapped' (by field maples and dogwood); exhibiting some coppicing of willows; and as we reached the end of the first field, increasingly 'unimproved' with a marked absence of cleavers, dock and nettles.

As the rain lessened, we saw a kestrel being mobbed by a crow, followed by retaliative semi-mobs before returning to its perch in a pylon (probably to keep an eye on the success or otherwise of a heron's foraging activity along the bank). We swopped deer-spotting stories and followed their crossing points across the Hogsmill River. We saw evidence of the super-warm Autumn with unseasonal blooms of meadow-sweet and clover. In fact there was so much to share that the 2 pm start of the public walk was soon upon us, with a significant minority remaining sandwichless.

The walk was well attended with a healthy sprinkling of councillors representing at least three wards. We stopped at six stations to discuss management, conservation status, the bunds, hydrology, historical and archaeological interest. A leaflet designed by Barbara Webb along a general theme of 'Biodiversity' was distributed as a reminder that TCF is a Nature Reserve (designated 2004) and although people are welcome, the council has a legal obligation to manage this site for wildlife.

Tolworth Court Farm Fields was purchased from Lambeth Council in 1989 by Kingston Council for the purpose of protecting the land from potential development. Lambeth had purchased the site as a cemetery for soldiers of the two wars. The bunds were created during 2001 after a large rave left the area strewn with rubbish most of which is incorporated within their structure. Although unpopular at the time, years of appropriate management has created a  suitable warm habitat for  flowering plants, reptiles and insects.

The hedgerows were considered sufficiently important to be granted funds under the Hedgerow Incentive Scheme in 1993, which ran for 8 years. In 2001 the Council entered into 10 year Countryside Stewardship Scheme (CSS) Agreement, when this finished in 2010 the site became incorporated into the Higher Level Stewardship (HLS) scheme for the land in RBK ownership  that runs from TCF all the way to Rose Walk at Berrylands. The CSS was approved for the purpose of maintaining the fields for hay meadows and restoring and maintaining the hedgerow system, in addition the creation of a wetland habitat on the wet meadow in the south east corner was completed.

We followed the route of an ancient drovers road, or trackway through TCF, although only one remaining area exhibits the characteristic double hedgerow and a  track the width of two horse and carts, which once would have run from Malden Manor  to Tolworth Manor and through to Cox Lane. This gave us the opportunity to visit  two private owned fields: an informally grazed area known as  Field 5847 and some secondary woodland. It was remarked that the bisecting public pathway would hardly contain a buggy let alone the width of two horse and carts, so common land has been lost at some point.

Stopping at the river, which marks the borough boundary, attention was drawn to the bonded gravel path parallel to the Bonesgate and Hogsmill river, for those who prefer a less wild experience. From here there are occasional views of the river, but as one participant pointed out the river banks are too high and the water too shallow, to make this worthwhile removing any trees along the Kingston side.

About half the party remained for an adjunct to the walk, across the busy main road. The Moated Manor site is roughly square with an area of approximately 2.7 ha. Features include remnants of old farm buildings, a medieval moat and pond. A barn, near the gated entrance, has a relatively new roof but no walls, and hosts a barn owl box erected by Lower Moles some years ago. A small brick hut remains on the corner of Kingston Road and Old Kingston Road. A reed-lined stew pond forms part of the moat, which runs from south west to south eastern boundaries and partially encloses an island. Evidence suggests there may be remains of a medieval manor on the island although this was not found during a dig by Surrey Archaeological Society some years ago.

At the end of the walk there was consensus among participants that TCF was well managed (in accordance with its Management Plan) that there was little incidence of litter, but  improvements could be made to seating arrangements as well as preventing further incursions by motor bikes. If anyone has any nice photos they would like displayed, particularly of the double hedge, then please send them to me. You can comment on this blog post, as always, but you will have to join or use a Google account as I get too much spam.
ancient hedgerow drovers road hedgerow survey kestrel Lower Mole Project Moated manor public walk species rich Tolworth Court Farm trackway