The Spanish broom Spartium junceum is a common Mediterranean shrub widely planted on roadside banks and naturalised in the south of England. This bank of broom was planted by Thames Water over 50 years ago and since then has provided this stunning show every June. Last week the tops were starting to flower and this week it is in full, brilliant glory. 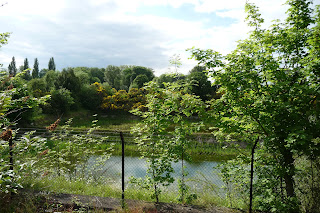 In its native Spain it is uses as a source of fibre for making paper and cloth. In France it is the constituent of an essential oil known as Genet Absolute where it has been grown in the south France (and Spain) since the 16th Century as a perfume ingredient. The Plantagenets named themselves after this plant (planta genet).

The leaves are of little importance to the plant, with much of the photosynthesis occurring in the green shoots (a water-conserving strategy in a dry climate). The leaves fall away in late spring and summer shoots are covered in profuse fragrant yellow flowers 1 to 2 centimetres across. In late summer, the seed pods mature black and burst open, often with an audible crack, spreading seed from the parent plant. The plant is also spreading along the wharf indicating its power of regeneration. 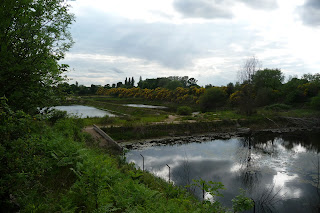 It’s chief value here, is in the structure and shelter it provides for nesting birds. Earlier posts show photo’s of perching sparrow hawk and kestrels as they survey the grassland for prey. Sites in the borough where this species has been recorded are: Holy Cross School; New Malden pipe track; New Malden golf course; and the old Worcester Park Sewage Works.