Letter to the GLA team members for the Environment and Regeneration

The  letter below was despatched 18.6.21. We are  hoping that making this public might facilitate a response

For the attention of:

We are writing to express concern at matters disregarded at the above redevelopment (GLA’s response Planning File). We were pleased to see the GLA questioning the lack of SuDs proposed in the FRA. (Flood Risk Assessment).

However, we are disappointed that the London Mayor’s own policies on Areas of Deficiency of Access to Open Space and Access to Nature have been ignored. The Mayor has committed to reducing the distance that people live from quality green space/Sites of Nature Conservation Importance - deemed as Areas of Deficiency- yet much of north Kingston is within an AoD (more than 1km from quality open space) refer to map appended.

The Barton Wilmore Environmental Statement, attests that the Open Space in proximity to CRE is within policy guidelines; includes a burial ground SINC and Richmond Park SAC SSSI (another borough) and that wildlife will not be affected by an increase to 6881 people. Can new residents walk their dogs in the cemetery? On graves, during funeral services? This was news to us especially after the cemetery was locked for three weeks during 2020 and continued access is on a permissive basis with Dawson road and ‘Lower Bonner Hill’ road gates LOCKED at weekends.

Will the cemetery continue to be ‘Public open space’ after the planning application is granted by Kingston planning authority or will it return to the former locking regime this assertion that Kingston Cemetery is Public Open Space is disingenuous?

In addition, land designated for leisure services and open space within our ward is being developed at Kingsmeadow/204 Cambridge Road as one of the decant sites and for a Church School, ensuring POS will be further diminished.

Loss of amenity and PROW’s (Public Rights of Way)

Approximately, 2km of Public Rights of Way on the estate will be lost in the application. The council has ignored the PROW’s as existing as the definitive map has not been updated for twenty years. This was apparent due to a recent appeal to the Secretary of State and now the council have an undertaking to correct this oversight. This is about connecting with local amenities, many of which have been closed to facilitate regeneration of the area in this needless damage to our neighbourhood. We have lost shops, pubs, the health clinic and local businesses.

This proposal will result in a massive loss of footpaths to Norbiton and a huge loss of amenity. These footpaths help create the informal areas that wildlife can also use. The privatised model of the gated estate- enclosure 21stcentury style- ensure formal gardens as the dominant culture; not community, but exclusivity and disconnectedness.

The London Plan includes policy (7.19) Biodiversity and Access to Nature, which links to policies and proposals on approaches to strategic planning in the Mayor’s Biodiversity Strategy. Policy 7.19 contains the following statement;

The Mayor’s Biodiversity Strategy sets out criteria and procedures for identifying land of importance for London’s biodiversity for protection in LDFs and identifying areas of deficiency in access to nature. Protecting the sites at all levels, serves to protect the significant areas of Biodiversity Action Plan (BAP) priority habitat in London and most priority species. This policy is employed by the Mayor of London when considering those larger planning applications referred to him for direction under the Town and Country Planning (Mayor of London) Order 2000. Local Development Frameworks of the London Boroughs have to be in general conformity with the London Plan. It is through these local policies that most protection of priority species will occur. Yet 4 lines seems to cover Biodiversity in the GLA response.

The house sparrow population on the estate is one of the largest in Kingston. It was identified by the council as being 25 birds when it is in fact, 125. This is one of the Nation’s priority species and falls under the Natural Environment and Rural Communities Act 2006. This has not been acknowledged during the consultation. In order to achieve a sustainable solution house sparrow, require a healthy environment, food, areas to have dust baths etc. they will not thrive in highly manufactured landscapes.

There is no mention of the cumulative impact of these developments on protected wildlife species; the slow worm population or badger welfare issues at the decant sites at 204 Cambridge Road, Kingsmeadow and Cumberland House, Kingston Hill.

1.      Air pollution has not been given sufficient attention

Kingston has a serious air pollution issue and this development will be compounding the problem. The greatest number of the most vulnerable people will be exposed to high levels of air pollution during the demolition. Deprived communities are more vulnerable to the effects of pollution. It is unfair that the council has targeted Norbiton, to be an Opportunity Area when there is such health inequality.

2.      The cumulative impact of several developments occurring in the borough at the same time needs more serious attention.

The issues highlighted in the Environmental Statement are very worrying

3.      The canyon effect of the towers may cause polluted air to be drawn into the estate.

Street canyons are generally highly polluted urban environments due to high traffic emissions and impeded dispersion. Pollutant concentrations in a street canyon depend on canyon geometry, traffic characteristics, atmospheric stability, entrainment of emissions from adjacent streets, and turbulence induced by prevailing winds The effect of so many towers has not been satisfactorily modelled. 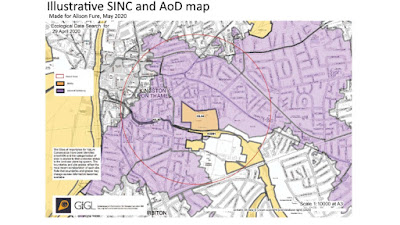