Enclosure like a Bonaparte let not a thing remain
No rest until it’s torn apart, the landgrabbers’ claim

John Clare
Between 1750 and 1850, approximately 4000 Enclosure Acts were passed converting common land into the private property of  large landowners. These acts destroyed a way of life that had sustained families for centuries.

Our open space is still sequestered from the public for the benefit of the private gain. Its appearing on the local agenda as the paths and alleyways of Norbiton, that  separate us from the traffic, are destined to be  developed to provide private courtyards for new residents. Our peaceful and informally vegetated routes for getting to the shops, the cemetery, or the bus stop will be replaced  when the Cambridge Road Estate is redeveloped.

This will mean losing almost 1 km of paths, in an area that has the worst access to open space than anywhere else in the borough. This can be see in the map above, which has been drawn up by Greenspace information for Greater London or GiGL. The purple area depicts the AoD.

So I have written to the council asking them to put 9 of the paths and alleyways onto the Definitive Map of Public Rights of Way. Finally today, I have received an acknowledgement for someone in Highways who is the interim manager for Public Rights of Way. In order to achieve registration, it needs to be demonstrated that people have used the paths for over twenty years by letters of support. So this can only happen with public support. 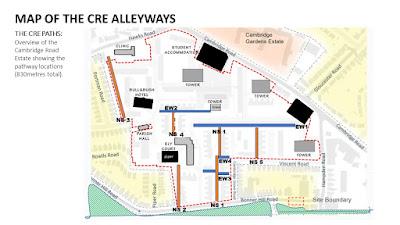 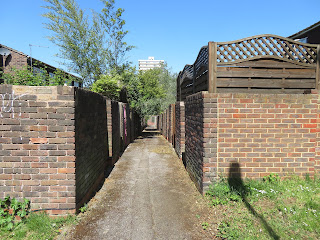 This is North - South 1 or the Bonner Hill road route from the fire barrier at the eastern boundary. 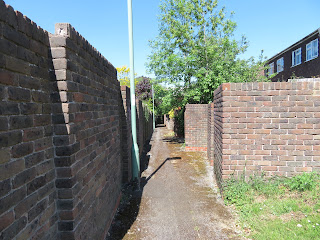 This is North-South 2 or the Bonner Hill road route to Ely Court at the western boundary. 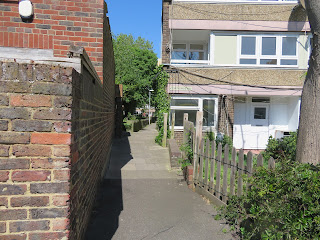 This is North-South 3 and is entered from Somerset road along Fordham Gardens. It was the route for many to the Hawks Road Clinic. 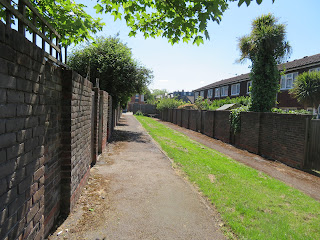 This is North - South 4 from Ely Court to the main path that runs 200m east to west across the estate. 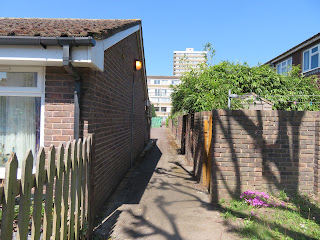 This is North-South 5 from Vincent Road to the path that I have termed the 200m east -west 'main spine'. 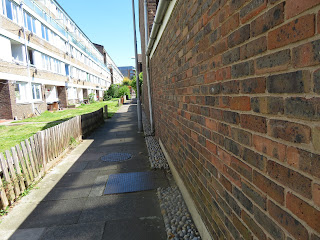 This is  east-west 1 and the main spine of the estate running 200m from Willingham Way to Burritt road. 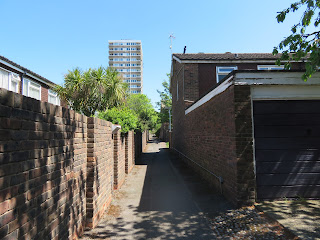 This is East -west 2 from Washington Road to the Surrey Sports Centre. 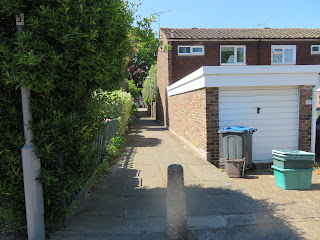 There are two east- west paths from Cambridge Grove Road onto the estate. This is the one facing the former sweet shop on the corner of Vincent road.