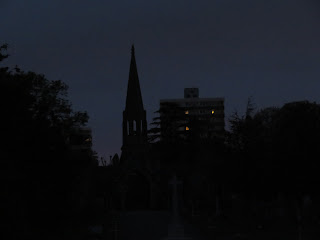 Today is Internation Dawn Chorus day and I left the house at 4.30am to listen to the birds in the local cemetery. Starting almost exclusively with blackbirds, robins joined at 4.45, followed by wrens (and  the odd woodpigeon). A pair of mallard flew over as the jackdaws started to rouse (possibly stirred by the noise of a helicopter) from the acacia/sycamore 'woodland' along the Hogsmill. 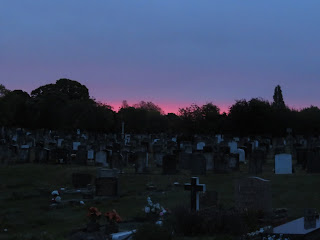 The Hogsmill river was the source of the most concentrated choir and song thrushes could be heard from both sides of the river. They have bounced back since the only new recruit was taken by a cat five years ago. As the dawn sky brightened, a low flying pipistrelle flew north, followed by a higher larger bat at 5.00 a.m. Synchopated sound along the river amounted to ten wren territories, with many more in the matrix (along with 5 blackcaps).


The jackdaw exodus to the chimney pots of New Malden was followed by a crassula of green parakeets, drowning out the 11 blackbird territories counted. Although this was down from 25 territories of former years, it was better than last years 10; blackbirds were already down on the ground now looking for brood food. Maybe they thought to abandon their posts on arrival of the  green locusts, when song turned to noise.

Daisies, common and ox-eye, as well as the stonecrop, were tightly shut. A watery dunnock song was lisped from a palisaded area, where a pressurised valve releases  jets of water from time to time (and starlings bathe in the arisings). A second bird (dunnock) was heard later from east of the crematorium.

No sign of the herring gulls breeding on the Magnet roof, next to the post office, perhaps they are like me -  latebirds; not so the jay with a beak crammed with something fairly domestic looking. The lower cemetery would be very quiet if it wasn't for blackbirds, robins and wrens in the perimeter gardens - as well as the house sparrows at the Dawson road gate - who are using a Lleyland cypress screen for their  night roost.

The line of oaks dividing the upper and lower cemetery - once a favoured spot for chaffinches - were completely quiet this morning. The road side limes have two pairs of collared dove's calling 'cucoo-cuck', which must please the residents of lower Bonner Hill road.

Relief to hear the chiff chaff, although it hasn't settled to singing in one spot yet, hopefully  it has mated. Just before reaching the chapel - two goldcrest territories were located- in the yews, along with tiny coal tits. A blue tit enters a fault in the cemetery coping stone and exits with a faecal sac. Last year, great tits nested in the hole from the tank overflow pipe, in the gable of the reception building. Only three territories today, which is bad; must get some solid bird boxes to replace the holes from lost trees.


The surprise of the day are a pair of stock doves - our only hole nesting pigeon - in the only oak tree remaining  in the cemetery  that could provide a nest site for them. I hadn't previously recorded them this year. A fourth song thrush in the matrix,  rather than  peripheral habitat, is a new record. No sign of the resident woodpeckers, gold and greenfinches. Leaving  the cemetery at 6.15am, a sparrow hawk stoops low along the hedges along Cambridge Grove Road, indicating there would be more to come if I'd waited.