Starting at the Hampstead ponds - a group, convened by David Fathers and the London National Park City - began to walk the course of the 'lost' Fleet river. There are at least two arms arising from the spring ponds in Hampstead and at Kenwood House; where the river arises from gravelly scars across the lawn,  especially in winter months. The Westbourne, Tyburn and river Brent also rise hereabouts.We left the Heath and followed Flask Road named after the bottled spring water industry, which was popular in the 19th century. 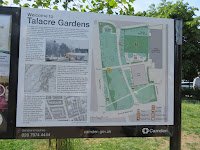 Following Fleet Road we walked into Kentish Town (Ken is the old English for Oak); at Talacre Gardens there is  signage detailing the industrial rise of the area at the expense of the river. Then to Chalk Farm and Camden. The etymology of Chalk Farm is an abridgement of Chalcot Farm, and has nothing  to do with geology).


Through Kings Cross -St. Pancras Old Church, where stands the Hardy tree - and to St. Chads, we were able to hear (and smell) the river through gratings in the road. Gray's Inn Road to Cubitt Street and Wren Street.    Then on to Mount Pleasant the Post Office Sorting Office, past the new Museum at Phoenix Place and an opportunity to hear the river again at Ray Road/Warner Street (where it is quieter if you want to take recordings. Onto the Farringdon Road. 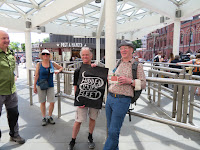 Our journey ended at Blackfriars bridge, where the sluice releasing the river into the Thames is visible at low tide.
Blackfriars David Fathers Fleet river. Hampstead ponds Kenwood Lost river