May 09, 2019
Citizens Assemblies are used worldwide as a mode of 'deliberative democracy' where a problem is debated without the outcome being predetermined beforehand. One organisation, 'Involve', brings people together, usually with facilitators and expert leads over 2 - 4 weekends, to understand and arrive at a consensus over complex issues such as road pricing.

The 'gold' standard would be an assembly at national level known as sortition; such a  formula was used in Ireland to decide  what should be the country's position on gay marriage and abortion. This is the type of deliberative forum preferred by Extinction Rebellion for discussing climate change; further information, including a podcast can be found on their website. Citizens Assemblies can also compliment representative democracy, especially at a time when our representatives spend more time resolving conflicts within their own parties, ignoring those who elected them.

If we are serious about the climate emergency and halting biodiversity loss, then we have to change our approach to recent tree felling. Whilst  felling might be justified in some woodland management and for reasons of health and safety, felling lines of trees around recreation grounds, felling operations not in accordance with tree reports, felling out of hours over a weekend, felling first rather than adopting tree management (pollarding); and chipping and  stumpgrinding, rather than creating habitat piles, cannot be justified. These are all  practices that we have not seen before on such as scale and are certainly not in accordance with the 28 policies contained in the Kingston Tree Strategy. 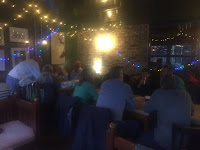 ....and so on a blustery May evening in a pub function room - we assembled our own Assembly. After various introductions we  split into 4 groups: the luminous Tree Musketeers, to discuss methods of encouraging watering and tree aftercare; the formidable 'Protect the trees on the Cambridge Road Estate' group; the radical Position Statement and Policy group; and the redoubtable Kingston Tree Action Group (or Rapid Response Team). Feedback was given at the end of the meeting as follows:


The Positions and Policy Group:
A need to form a multi-stakeholder view of what the borough should be like. A standard Tree Protection Order (TPO) template could be produced  to increase the number of trees protected by this means. Reminding the borough of its commitments under the Kingston Tree Strategy (a common theme). A need to increase awareness around the importance of trees by going into schools and leafleting. The recognition that there is a need for increased resources, so some fund raising might be appropriate, especially to obtain expert opinion.

The Watering Group noted:
'Water Me' signs on trees might encourage watering;
Local schools, church groups and sports clubs might form 'watering clubs' and act as Tree Heroes;
Leafleting of neighbourhoods where trees had been planted;
Watering dates should be added to tree stakes, (proof of aftercare was formerly contractual); and
'Don't stint on the strimmer guards', especially on mature trees.

The CRE Group  required:
A base map of the trees on the Cambridge Road Estate (available from the council); baseline data on the trees as far as DBH measurements and species was already held by group members. A CRE participatory website, including photos from  residents of their favourite trees. Awareness raising of the beauty of the natural environment as an urban forest, could come from additional walks planned for the summer, including a bat walk. A need for an independent tree survey to present to Countryside Properties in the event of a discrepancy in assessments was an option.

The KTAG will arrive and make the appropriate interventions - gently and peacefully - checking that any conservation designations and tree protections have been respected. Checks will be made for nesting birds and the extent of works will be discussed. Photographs and videos will be taken, with non-violent direct action, a last resort. They can be contacted via a What's App Group. If you would like to add your name to this let us know.
Cambridge Road Estate Citizens Assembly Kingston Tree Action Group