January 24, 2019
The bloggers will be burning the night oil after each of the Examination in Public (EiP) hearings of the Mayors London Plan. Some of yesterday's session on Opportunity Areas and Regeneration, is expounded below see also Kingston's emerging Local Plan

Whilst no one wants to stop genuine homes being provided for our citizens - shelter is a human right - many are concerned about the way this is being undertaken. The inclusion of much of Kingston as 'Opportunity Areas' to deliver housing targets of 30,000, has raised a number of questions- including from our council - who want to see this number halved. 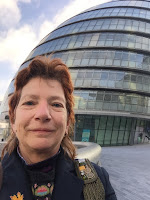 The London Tenants Federation as well as many  other organisations  are calling for a halt in the spread of Opportunity Areas. OA's can mean that normal planning rules are suspended and density increases can be up to 300% ABOVE  average new development. They determine that an area can take extraordinary numbers of jobs and new homes; totally removing established communities.

Typically they can accommodate at least 5,000 jobs, 2,500 new homes or a combination of the two, along with other supporting facilities and infrastructure - in the case of Kingston 9,000. https://www.london.gov.uk

'Opportunity Area', confers a 'permitted development right', which can lead to 'total footprint developments' with  'total biodiversity loss' (suspending both the legal duty of the Mayor and the council  in their obligations to 'conserve wildlife in all of their functions'); but we can't let this happen - no one can live without nature, it is everything we need and interact with: air, water, earth.

Interesting to note that the number of signatures gathered by the petition against over development in Kingston, now runs at three times the number of people responding to the consultation (after only 2 weeks of going live) https://www.change.org/

Only the GLA team appeared happy with OA's- there was a consensus amongst the community organisations, who had been through the process - as follows:

Opportunity Areas were born in  the Council's 'Direction of  Travel' document 2016; 'Affordable' housing and protection of the ecology of the Hogsmill Valley were afterthoughts in the document.


In the 'Director of Place's' report (to advise councillors on the "Direction of Travel" document) 2016 Appendix B, B5 under the environment heading:

This is a failure of a public body to engage with its statutory duty conferred under the Natural Environment and Rural Communities Bill, (NERC) 2006 which extends the Countryside and Rights of Way Act, 2000 (CROW Act) on the duty of public bodies and statutory undertakers to ensure due regard to the conservation of biodiversity.

The sites proposed are fundamentally unsound and not evidence based. The process of determining the Opportunity Areas is not in conformity with the following:
Nature Reserves will be used for infrastructure according to the Tolworth Area Plan especially at Tolworth Court Farm and its environs.

This runs counter to the Mayor’s All Green Grid ref page 111 which states ‘increase the potential for biodiversity and nature conservation at areas along the Beverley brook and Hogsmill rivers. and

In the Sites identified as suitable for development the following are identified for Tolworth:

The proposed regeneration of the Cambridge Road Estate runs counter to many policy areas; the Mayor has committed to reducing the distance that people live from quality green space/Sites of Nature Conservation Importance -deemed as Areas of Deficiency- yet much of north Kingston is within an AoD (more than 1km from quality open space.

The wildlife interest has not been assessed- important for physical well- being and mental health but No account has been taken of natural environment: more than 100 trees, some more than 50 years old; colonies of house sparrows; bat interest; etc

There will be a massive loss of biodiversity if the proposals continue at their proposed density see https://www.walk-with-jane.com/birds-and-bats


The regeneration of estates was debated in the afternoon session. These areas are often chosen on the basis of the IMD  (Index of Multiple Deprivation). Many groups complained that this meant the vulnerable were shouldering huge burdens and that the results of being regenerated were negative:


The only positive statements - other than from the GLA- came from a group from LB Brent commenting on the development of Old Oak Common and the role of the Development Corporation which prepared a planning framework; and Greenspaces Network, which commented on the number of friends groups now co-managing parks.