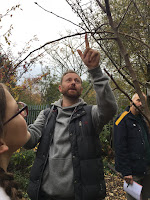 on  December 15th we intend to plant an orchard in Berrylands, where remnants of orchards can be seen in some of the large gardens that back onto Elmbridge Meadows (near Rose Walk). In former days this was  a stronghold for bullfinches, although sadly this beautiful bird is no longer present at many locations in the borough. Link to the story so far Along with several community groups including schools; members of the newly formed Green Lane Community Orchard, attended the Orchard Project's 'Orchard Leaders' course earlier this  month at Finsbury Park. We visited an edible food forest in the south-east quadrant of the park where Lewis demonstrated annual growth, leaf and fruit buds as well as unusual trees such as medlar.

We tasted the leaves of salt bush and a Nepalese pepper as well as watching  many birds eating the seasonal berries including the yew arils;  Orchards are hot spots for biodiversity and have been shown to provide a refuge for over 1800 species. Particularly in urban areas, an orchard managed for biodiversity can be a proxy for ‘a mini wood pasture’, a most important habitat. These orchards retain the valuable dead wood component, as only 20% of wood is pruned away each year, and the arisings can be left to form habitat piles. The grass will be left longer and not mown becoming a haven for reptiles, wildflowers and an assortment of fungi. Old pear trees can live for 100 years and host rare invertebrate species. 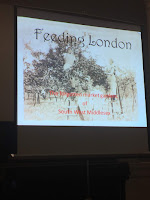 Also this week as part of the Richmond Literature Festival, David Lawrie gave his splendid talk on Feeding London - a look at the families who undertook the market gardening in West London from the nineteenth century (and earlier with the arrival of the Poupart family, 1779) and the 400 acres of fruit growing that occurred in Hounslow, Isleworth, Twickenham - a process mirrored in the Lee Valley and for a short time in Chessington, and Tolworth. A member of the Poupart family was in the audience and there is still a 'Poupart' variety of daffodil. Other dynasties included A.W. Smith, William Whiteley of Hanworth, Lobjoits (Lovejoys) Mann, Dancer, Blackmore (see previous posts on R.D. Blackmore, Spooner etc. 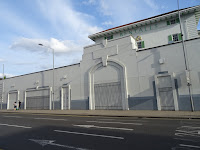 We have chosen the trees for our orchard (see the link above) including a mulberry tree; interest has increased in this species particuarly the edible Morus nigra in recent years. The Museum of Walking, in conjunction with Dr. Peter Cole from Morus Londinium host regular mulberry walks in various parts of London. Some have been covered in previous posts, including the campaign by residents to save an old mulberry tree in the grounds of the old chest hospital near Victoria Park (which the developers claim they can move). This week there was a mid-week mulberry walk around the Inns of Court and Clerkenwell where several specimen trees are found at Lincolns' Inn, Grays Inn and the Inner Temple.


http://spitalfieldslife.com/2016/06/29/a-brief-history-of-londons-mulberries/ for Peter's comprehensive blog. Also see the https://www.moruslondinium.org/map for more information which states that in in addition to the mulberry at Dorich house at Kingston Hill, there is a mulberry in New Malden at KT5 5EF