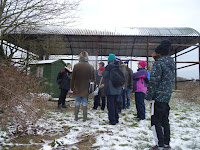 Many participants on our afternoon stroll, had been on a morning litter pick, around the snowy, service roads on the Sunray Estate; they had a jolly good turn out despite the obvious weather - related- inclemencies.


After meeting at the Court Farm Garden Centre Cafe (aka as CFGCC) we took the Old Kingston Road, overlooking  snow covered fields; and saw the kestrel, twice. I imagine however that the kestrel saw a lot more of us. There was a brief discussion on Mercy - we couldn't remember how to avoid straying snowballs, but fortunately our young assailant had a familial enemy in his sights.

According to Wikipedia, 'Mercy' is a regular game and is more popular when played in the snow. Players must use the basic mercy stance: twisting fingers, pushing to the ground - whilst of course - avoiding snowballs. The person who says 'Mercy!' or gets floored loses the game. We used to say 'Uncle' but no doubt you will have your own version and the safe word was different if you had learnt Latin at school. Ancient Romans playing 'Bench Mercy' in earlier times when it was  Talworth  may have said 'avunculum'.


Once gathered by the be-icicled barn on the Moated Manor site - and while hearing the dunnock singing and singing in the hedgerow - we listened to Lucy read a John Clare poem about snow. He also said, 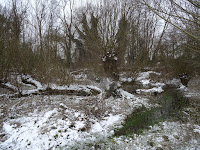 'I love the snow, the crumpling snow
That hangs on everything,
It covers everything below
Like white dove's brooding wing,
A landscape to the aching sight,
A vast expanse of dazzling light'.

Lucy remarked on the way dazzling light highlighted the uppermost surface on the dead hedges - that protect the perimeter from incursions - whilst continuing to allow animal movement along the river corridor. We discussed the plummy hedgerows along the A240 and the elm suckers; whose  provenance may stem to the 1820 (late for Tolworth) acts of enclosure, granting local landowners permission to fence the fields, heaths and woods, excluding the people who had worked and played in them; very much like the great-grey-barrier that now encloses the former go-karting track at Jubilee Way.


Ancient trees were felled, the scrub and furze were cleared, the rivers were straightened, the land straightened and squared. Farming became more profitable, but many of the people of Tolworth – especially those who depended on the commons for their survival – were deprived of their living; much as we  see today, those hoardings erected around  once open land, which will neither be open for any - kind - of - karts nor available for nature.


We discussed the extent to which Richard Jefferies, on his daily walks  around his home of  Tolworth would have seen these changes, gathering inspiration for his nature writing, much in demand by the travelling public-the London commuters.