August 28, 2017
Five bat species were caught at a Chessington location, during a harp-trapping session, convened by members of local Bat Groups as part of the National Nathusius' pipistrelle project.

This included several common and soprano pipistrelle bats; two Daubenton's bats; a brown long-eared bat and another that took observers a little time to identify. 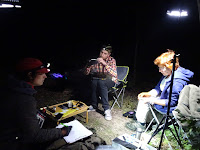 By looking at the dentition under a magnifier it was possible to see which of the small Myotis bats matched  the cusps and protocones present or absent on the teeth. It turned out to be a whiskered bat; there are no recent records for this species in the borough.

This is because the genus is difficult to record on bat detection equipment, emerging slightly later than pipistrelle bats and as a woodland specialist has specific habitat requirements.

At a similar trapping session at Kempton Park, a whiskered bat was caught in the harp-trap which was a first for Hounslow. A Nathusius' pipistrelle was controlled that had originally been ringed in Latvia, indicating the value of the project in illuminating the long migration routes taken by these small mammals.