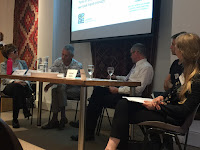 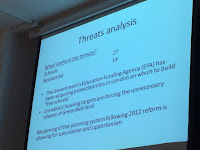 The CPRE LONDON AGM saw the launch of the GREEN LONDON MAP accompanied by a discussion on the future for green spaces in London. Entitled HERE TODAY, GONE TOMORROW?

The panel discussion included contributions from those who are fighting to protect and make better use of our valuable green areas, which face mounting threats from development, funding cuts, and commercialisation (i.e the private use of publicly owned assets).

The number of free school applications currently threatens 27 MOL/Greenbelt sites due to the Government Education Funding Agency acquiring protected sites in London on which to build. Similarly, 14 MOL sites (Metropolitan Open Land) are  earmarked for housing schemes after the weakening/reform of the planning system since 2012.

Groups from Oakfields in LB Redbridge, Northfields Allotments (purported to be the oldest in the capital) and several others were present. During the discussion we heard how - Deeds of Covenant bequeathing land in perpetuity - had mysteriously disappeared from Land Registry. How does that work?

I left depressed but heartened by the fact that the second largest branch of CPRE -with 2,000 members- is here in London.