May 21, 2017
Led by members of the London Geodiversity Partnership and supported by the Friends of Richmond Park and the London Natural History Society, 35 of us celebrated one hundred years since the original GA excursion 19.5.17. We started at Gallows pond, a large landslip near Thatched Cottage House, where there are now two ponds on the springline; one was filled in due the appearance of an invasive species Crassula helmsii aka New Zealand pigmyweed. Unfortunately it appears to be back.
The new masts appearing around the park are monitoring  noise and pollution from Heathrow.

Members of the GP demonstrated the plasticity of the  London clay,  terrace gravels, 'bunter' pebbles (transported by tributaries from the north) veined quatz, and lower greensand churt (used as a building stone near Guildford); 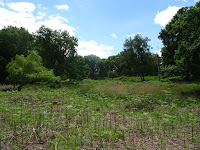 Gravel extraction took place in Richmond Park; either from quarries or from naturally arrived gravel at Pen Ponds. Clay was also extracted for brick making. Before crossing to the Coombe Golf Course at Warren Road and the university site at Kingston Hill, we discussed the hand made bricks found within the eight mile wall around Richmond Park. They were made using the local clay  by itinerant brick-making families in the 1650's.

In  the afternoon we crossed the A3 and the Beverley Brook to walk up to Wimbledon Common. Here we are looking at Caesar's well, later visiting the Queens Mere before reaching the windmill. 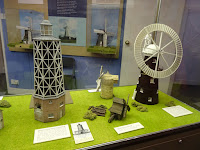 En route we had an opportunity to discuss the various granites we had seen (around the well) and their provenance. At the excellent Windmill Museum there is a history of windmills and we noted the materials used for mill stones including the expensive and highly prized French quartz.
crassual helmsii Friends of Richmond Park Gallows Pond London Clay London Geodiversity Partnership London Natural History Society Terrace gravels Wimbledon Common Windmill museum