April 28, 2017
Swifts are among the last summer migrants to arrive and around the first to leave our shores. Some birds were recorded over Island Barn and Staines Reservoir last week, and my records show that this is the week when they usually arrive in Kingston and are found feeding over Pen Ponds.

Breeding still takes place in Berrylands (14) with young fledging around the first week of August. Peak numbers are recorded from birds breeding at Bushy Park, Hogsmill Sewage Works, R. Thames, and Sunny Surbiton with the favoured deep eaves that characterise properties in and around Maple Road.

Swifts  spend most of their life on the wing, including sleeping and mating. There are useful facts on swift biology here https://www.rspb.org.uk; although I find this website the more pertinent for the airing of issues surrounding the perilous decline of this bird http://swift-conservation.org

Between 1995and 2011 we lost about a third of the birds that nest in Britain. A major reason for this was the large scale refurbishment of social housing as well as historic buildings (similar issues affect  all comensal species such as sparrows and bat species). The former niches used by these birds are never provided within new refurbishments. Replacement UVPC and plastic soffits, will never warp suffiently to provide access to warm dry crevices. 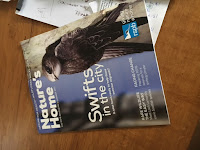 Each year sees a new initiative launched by NGO's to draw awareness to the problem. In London (c2006) there was BOB initiative (Birds on Buildings) run by the GLA. The RSPB are currently engaged in a monitoring programme and I was lucky to meet some of the participants recently on a recent holiday.

The Slovakian Bat Conservation Group per Martin Celuch were ahead of the game - producing a joint bat and swift box - for two of the species most threatened from our desire to keep our dwellings visitor free. These boxes can be erected on the flank walls of tower blocks, which have proved popular, removing some  conflict with residents regarding noisy bats and unsightly bird droppings. 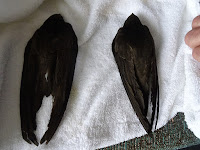 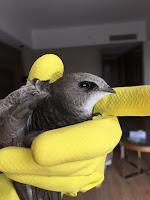 Migratory birds  en route to thier breeding areas  experience a suite of changing problems - that we can't mitigate - illustrating the continued need for international agreements. This includes the megahotels, located along the coastline of Greece and Turkey. Six birds were found grounded limp and wet - on hotel balconies - after flying into windows after rain at Kusadisi, Turkey.

After a couple of hours in a dark drawer most birds were able to fly to their final destinations. One took slightly longer, requiring rehydration and rest, but was able to pump itself up sufficiently to catch up with the others.