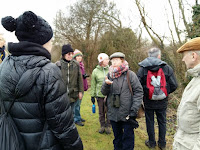 We held a wassail this weekend - paying homage to fruit trees along our way - as well as local figures important in Kingston's Pomology or apple story. Our walk began in Hook, close to the former home of the founder of the heritage apple 'Colonel Yate', which was raised by nurseryman W H Divers of Surbiton (c1905); we continued to look for apple references as we traversed Orchard Gardens, Apple Grove, Cox Lane towards Tolworth Court Farm.

En-route we visited Causeway Copse (now know as Bullwhips- when did the council change its name?) where wild Malus species have been recorded according to the London records centre (Greenspace Information for Greater London or GIGL). We left votive offerings or 'gifts' - in the form of small pieces of toast - traditional, particularly in cider growing regions.

In the eastern fields at Tolworth Court Farm we found bird species associated with  orchards, such as  redwings,  often found searching for any remaining winter windfalls. The latter were plentiful at Causeway Copse (40) and along the route they were noted feeding on the berry bushes around the Chessington Industrial Estate. Bullfinches are also recorded here at Field 5847- but they can be hard work to find. 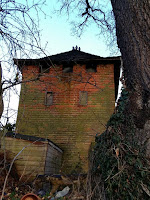 Once through the farm we visited the Towlorth Apple Store, which continues to lose tiles from its pagoda-style roof. This Gothic structure c1856,  is in desperate need of some TLC. Brian took a group to see Kingston Permaculture Reserve, which was closeby, where a wassail is planned for later this month 28.1.17 see https://kpr2016.wordpress.com/

In the Spring, we hope to undertake a second apple walk, as a homage to the founder of Mitchelson’s Seedling. This was raised by A. Mitchelson, a market gardener in Kingston-upon-Thames in the 19th century. Get in touch if you are interested in attending. More details will be available at the Kingston Environment Centre on March 4th, which will be hosting the 'Jam Today' exhibition, which coincides with the New Malden Farmers Market and should be a fruitful experience.

These are photos of a recent wassail in Dibbinsdale with people thanking the trees for their fruit. In some cases the fruit remains on the tree: perhaps Annie- Elizabeth?