February 21, 2016
Unfortunately,  the same river that  Lucy wrote so lyrically about in a previous post,  was  subject to a serious sewage spill during the early hours of 8.2.16. This was apparent from dead fish floating in the water, including this adult Barbel seen at the Clattern bridge 4 days later.

Due to an electrical failure, pumping equipment failed and subsequent pressure caused a blow - out at the Green Lane Recreation Ground. Many will remember this site has been subject to lengthy closures in the past (2003) due to sewage contamination and remedial works. 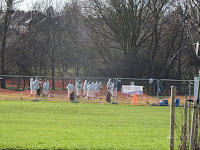 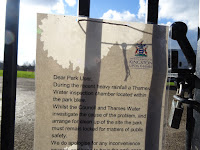 Green Lane Recreation Ground will be 'closed until further notice' reads the notice on the gate. The clean-up is a lengthy operation and 2,500 blue bags (to the right of the photo)  containing rag (toilet paper etc.) have been removed so far. 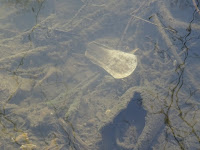 But who is going to clean-up the river banks as the tide of sewage flowed for 12 hours encrusting the riparian vegetation as it flowed to the Thames.

The evidence can be seen all along the Hogsmill from Green Lane to the Magnet at Villiers Road. This is the only stretch of the Hogsmill with the occassional water vole sighting. Why is it that Thames Water continue to sell off their own land for development; even though it has been identified as floodplain and forms an important part of the borough's flood defence (see previous posts).

Why are they permitted to use our public spaces such as: Green Lane Recreation Ground; and Surbiton Fishponds for operational reasons,  giving nothing back to the conservation and management of those spaces. Thes events are becoming routine and are causing visible harm.

In other boroughs Thames Water have paid six figure sums to put right the damage caused and we should expect no less for the Hogsmill.